In previous blog posts, we talked about the development process of Can It Fit?, an Augmented Reality (AR) experience available in the Edmunds Android application. In Part 1, we discussed our development approach and high level architecture. Part 2 focused on using the Sceneform library to abstract away the pain points of directly dealing with computer graphics development.

Recall that Can It Fit? is an AR experience that lets a car shopper visualize a virtual vehicle in a space and see if it fits. To do that, users draw a virtual bounding box around their real world space.

This post will focus on the implementation details of the virtual parking space. Geometrically, the virtual parking space is represented by a rectangular prism, which we’ll refer to as a “box”. We first draw the base of the box, then adjust its height with a slider. Drawing the base is performed in multiple steps by placing points on AR-detected planes within the app.

To represent the box mathematically, we need eight vertices positioned in virtual 3D space and connected together to form edges and faces. Every frame of the application, the vertices update their position according to user input. We look at the box as a single object and its vertices and faces as internal data or properties. We also know that the box needs to be able to reposition, rotate, and scale. Understanding the underlying data and desired behavior, we can sketch a rough model of a Box class. 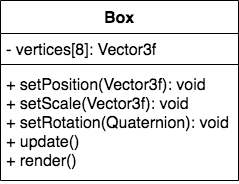 Drawing the box on the screen is another “dimension” to the problem. Since the most common OpenGL ES primitive for drawing objects is a triangle (Part 2), we would need to break every face of the box into triangles (two at a minimum, because one rectangle can be broken into two triangles), and send its vertex information to the GPU using OpenGL ES API calls. Vertex sort order also matters, which adds another level of complexity for us to maintain in the codebase. Ideally, we would like to have an object that takes care of the box internal implementation and rendering details, and exposes methods that are meaningful to update logic such as changing the center and length of the sides.

Once we made the switch to Sceneform, we took advantage of the makeCube method from the ShapeFactory class. The method takes center, size, and material (in our case, a color with transparency) parameters and provides us with a ModelRenderable object that we can update, which is exactly what we wanted. Under the hood, Sceneform takes care of all the vertex updates and graphics API calls.

Now that we have discussed the implementation concerns, let’s take a look at the user flow. The user is tasked with placing and orienting the box in virtual world by setting corners and adjusting dimensions. Below is the flow for completing the box:

Now that we’ve established the user flow and geometric requirements for drawing the box, we need to determine an implementation. There are multiple ways this can be done.

The approach we took is to create a unit box at the start of the application, where all its sides are length of one. During each frame draw, the box’s scale, position, and orientation is updated based on the user’s input and the application state transition. We can hide the box in the early application states by scaling all of the sides to zero, shaping it into a rectangle by setting the height to zero, or stretching it to look like a line. As the user progresses through experience, the box is updated until it is complete.

We took advantage of the Sceneform library and made our Box extend the Node class. A Node represents an object in scene graph that renders a given mesh (box mesh, in this case) and is updated every frame by overriding the onUpdate() method, where we add our application logic to update world position, orientation, and scale.

Now we’ll look at how we handle different cases in the onUpdate() method.

Given: tracker.
Task: place the first point pt1 on the horizontal floor plane. It will represent one of the vertices of the box. 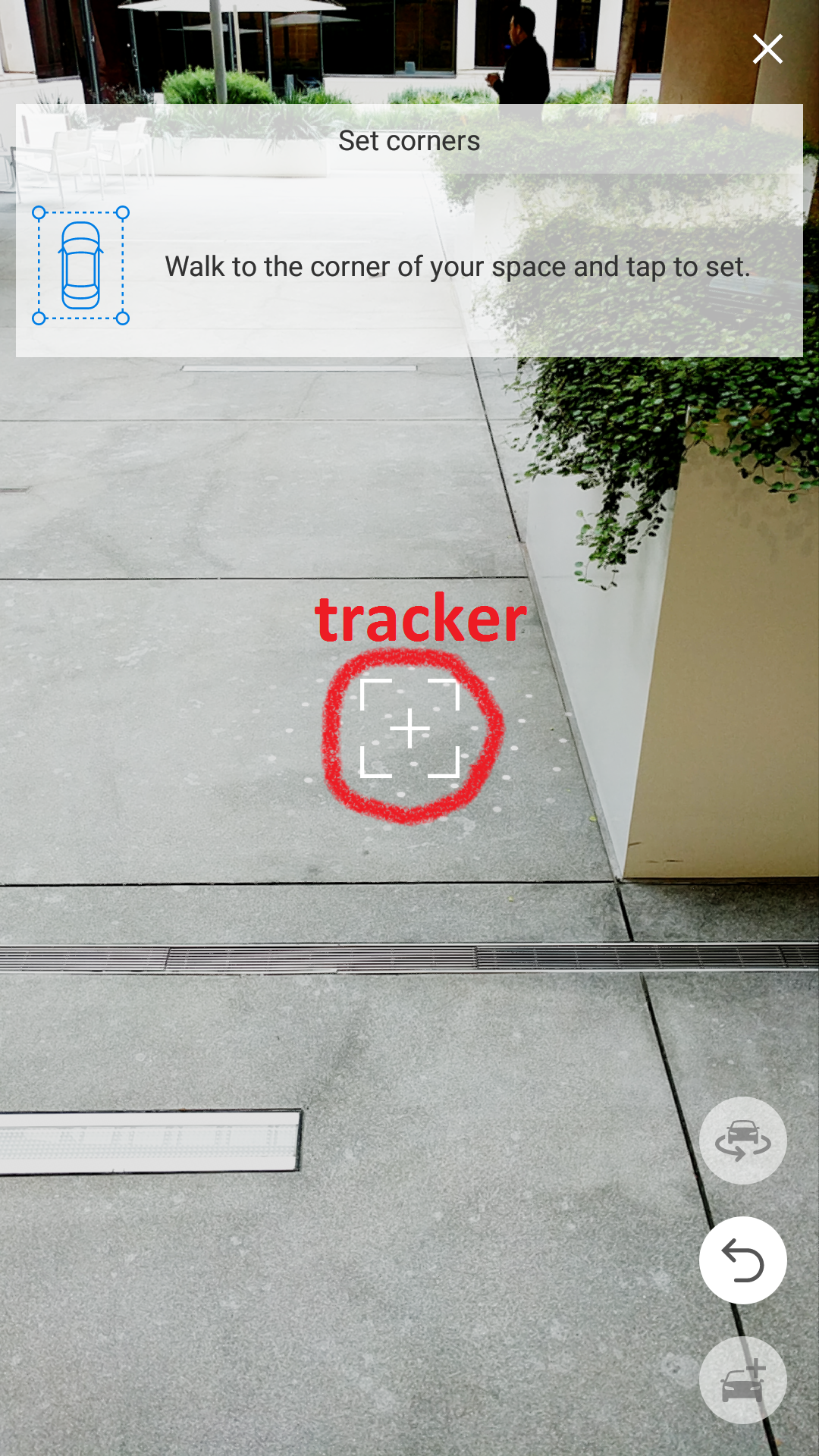 We call this “Case 0”, because we don’t have any points placed (anchored in virtual world) yet. This is our starting position and the only thing that is available is what we call a tracker - the center of the screen ray traced to a virtual plane. It represents a point in the virtual world where the center of the camera is aimed.

Since the only “point” we have is the tracker in this state, we set the center of the box to its position and scale the sides of the box to zero to make it invisible.

When the user taps on the screen, a first point is placed (anchored) at the intersection of the ray and the first virtual plane it hits, which we expect to be the floor plane, but any other horizontal plane will work the same.

Given: tracker, pt1
Task: place second point pt2 on the same horizontal plane as pt1. Second point will represent another vertex of the base of the box. A line connecting the two points will be an edge of the box. 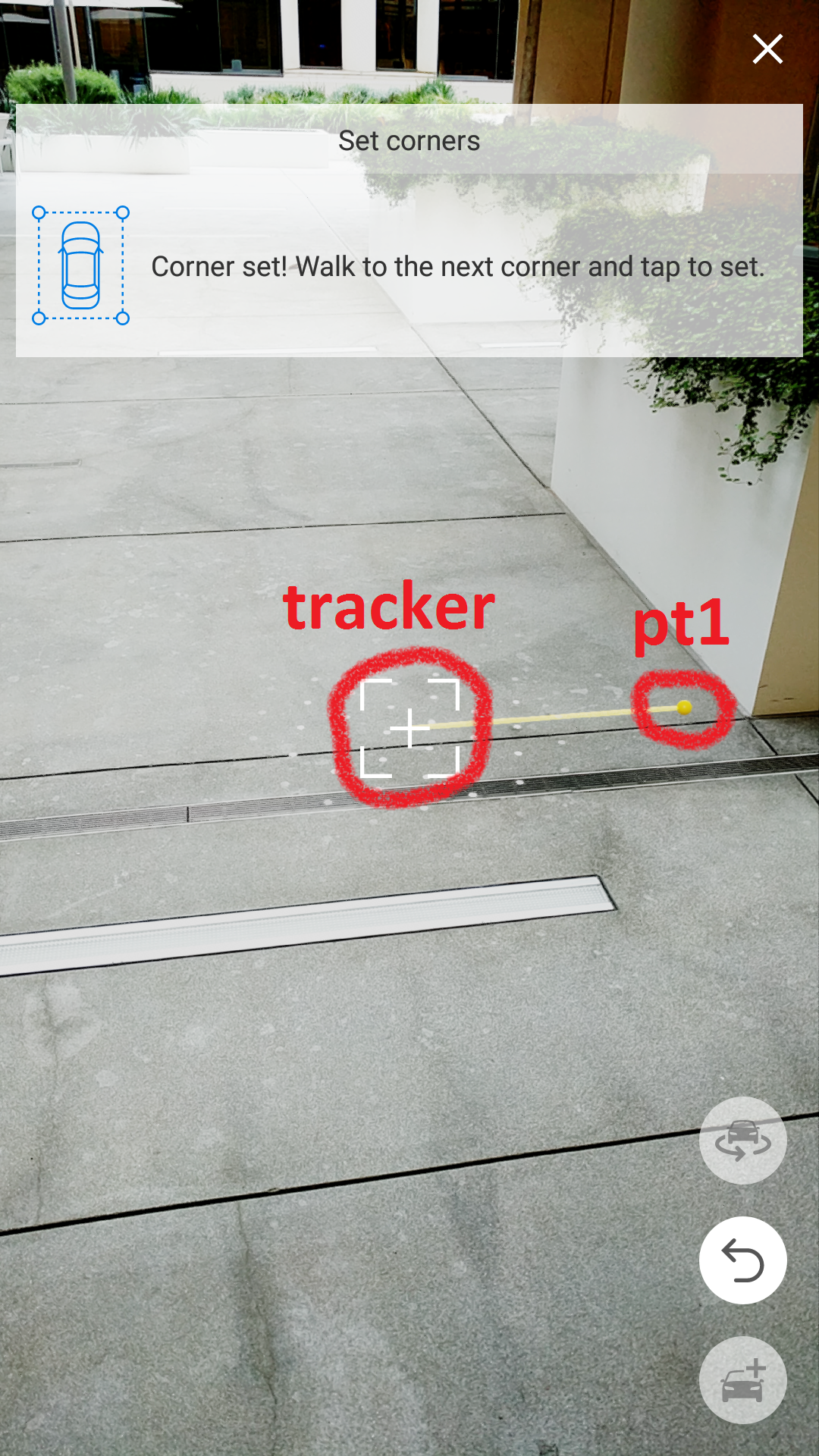 Now that we have pt1 anchored to a virtual location in the world, the logic for updating the box in this state will be different. When moving the camera around, we want a line to be drawn from previously placed pt1 to the tracker. The line is a visual indicator of the side of the box. The line is actually a box object with one dimension scaled to the length between pt1 and the tracker with the box center being the midpoint and infinitesimal height and width to make it a line. To accomplish this, we need to apply some updates to our Box class.

For the center, we need to find the midpoint of pt1 and tracker. The ARCore framework allows us to access x, y, and z coordinates of those points. Now, we just apply midpoint formula and we have the center of the box.

Then one of the sides is chosen to be of length that is the distance between pt1 and tracker, and other sides are scaled to a number close to zero so that it looks as thin as a line on a phone screen.

Given: tracker, pt1, pt2
Task: While pt1 and pt2 form an edge of the base of the box that we may label width, move the tracker into the distance and place a point pt3 to mark how far you want the length of the box to extend. 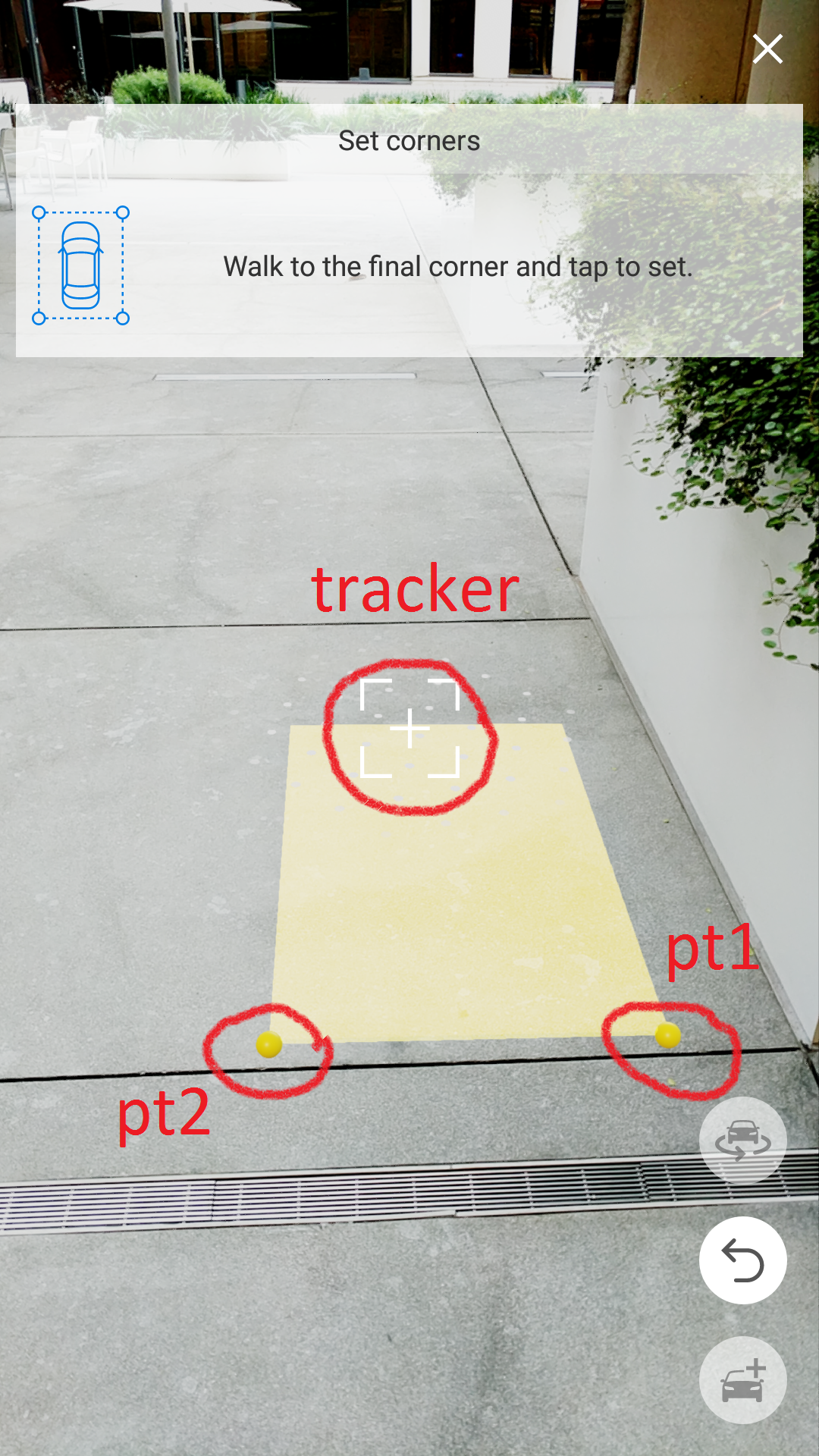 This is the most interesting case, in my opinion. Since we are still working with the base of the box (height is still set to a very small number that it looks flat), we can visualize this problem in 2D for simplicity. 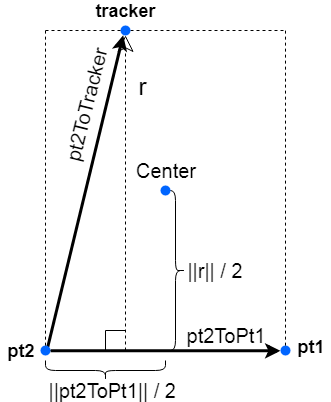 There are multiple computational paths we can take to get us what we are looking for. The simplest one is to to use a rejection formula to find the rejection r of vector pt2ToTracker on vector pt2ToPt1. Rejection r is a vector orthogonal to pt2ToPt1. Computing its length gives us length of the box. To find the center of the rectangular base, we offset the midpoint between pt1 and pt2 by half the length of r in the direction of r. 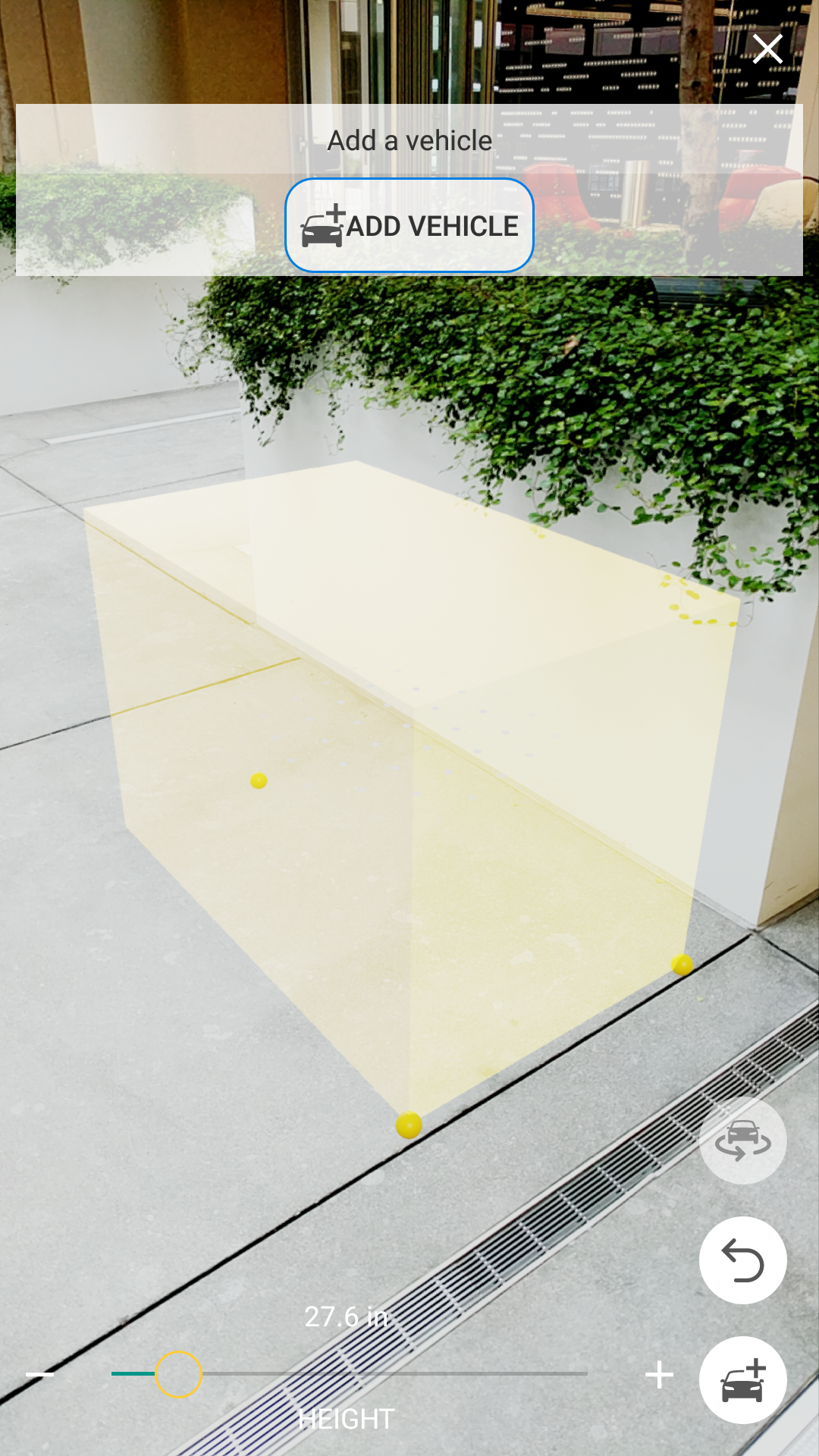 So far all the transformations we’ve discussed deal with positioning the center of the box and scaling its sides. Another very important transformation that must be updated every frame is the orientation of the box relative to the forward direction of the world. Without properly orienting the box, we can’t expect its positioning and scale will give us the desired result.

When an object is first created, it doesn’t have a rotation value and gets placed with its default orientation, which is the same direction as world’s forward vector. This wasn’t acceptable to us, because we can’t expect the user to perfectly align the orientation of the box in the direction they want.

Before we can find the offset from the world forward, we must first find the new forward vector of the box. We do so by computing cross product between vector that goes from pt1 to pt2 and the up vector. This results in a vector that is both orthogonal to the edge between pt1 and pt2 as well as the vertical up vector. Note that our up direction of the box does not change and stays the same as the up direction of the world. All rotations are done around the world y-axis (in OpenGL, y-axis points upward). We are never “tilting” the box, because it is positioned on a horizontal plane (ARCore is limited to horizontal plane detection as of development of the project). Once we obtain the new forward direction, we can use it to compute the new orientation value.

To conclude, I’d like to share some things I learned along the way that enhanced my effectiveness while working on computer graphics applications. 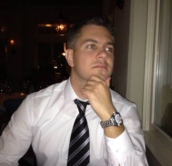 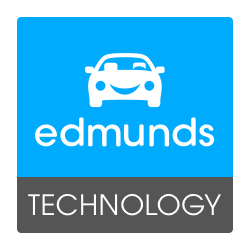